Home › Recipe of the Month

Recipe of the Month 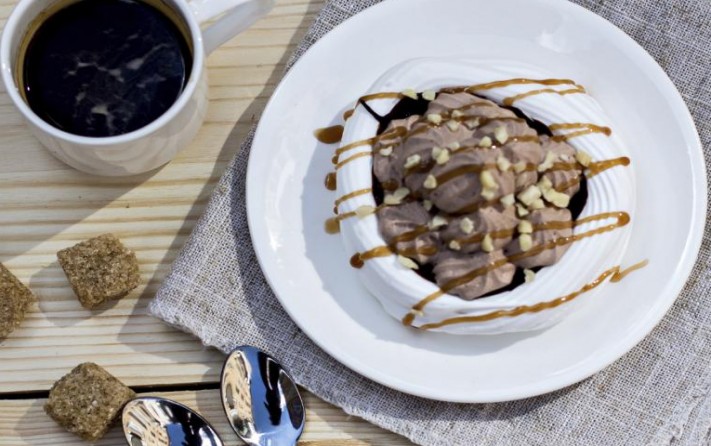 For the cake: 2 1/2 sticks unsalted butter, cut into pieces, plus more for the pan, 6 ounces bittersweet chocolate, chopped, 6 ounces unsweetened chocolate, chopped, 6 large eggs, 3/4 cup turbinado sugar, Pinch of salt,1/2 cup stout beer (such as Guinness,1 teaspoon vanilla extract For the meringue: 2 ounces semisweet chocolate, chopped, 2 tablespoons unsalted butter, 1 tablespoon light corn syrup, 1 cup granulated sugar, 3 large eggs whites, 1/4 teaspoon cream of tartar, Pinch of salt, 2 teaspoons vanilla extract. Directions Make the cake: Preheat the oven to 325 degrees F. Butter the bottom and sides of a 9-inch springform pan and line the bottom with parchment paper. Put the bittersweet and unsweetened chocolate in a heatproof bowl and set over a saucepan of simmering water (do not let the bowl touch the water). Stir until the chocolate melts, then remove the bowl from the pan. Put the eggs, turbinado sugar and salt in the bowl of a stand mixer. Set the bowl over the same pan of simmering water and whisk until the mixture is warm, about 2 minutes. Transfer the bowl to the stand mixer; beat with the whisk attachment on medium speed until tripled in volume, about 5 minutes. Meanwhile, bring the beer and vanilla to a low boil in a saucepan. Reduce the mixer speed to low; beat in the beer mixture, then the melted chocolate, until combined, about 2 minutes. Gradually beat in the butter until incorporated. Pour the batter into the prepared pan. Bake until a toothpick comes out with a few crumbs, about 35 minutes. Cool in the pan on a rack 1 hour, then run a knife around the edge of the pan and remove the ring. Let cool completely. Make the meringue: Microwave the chocolate, butter and corn syrup in a microwave-safe bowl in 30-second intervals, stirring, until the chocolate melts. Whisk the granulated sugar, egg whites, cream of tartar, salt and 1/3 cup water in a heatproof bowl. Put the bowl over a saucepan of simmering water; beat with a handheld mixer on low speed, then gradually increase the speed to high and beat until soft peaks form, about 5 minutes. Remove the bowl from the pan; continue beating until the meringue is cool and fluffy. Fold in the vanilla, then fold in the melted chocolate until swirled. Spread the meringue on the cake. Photograph by Anna Williams Recipe courtesy of Food Network Magazine